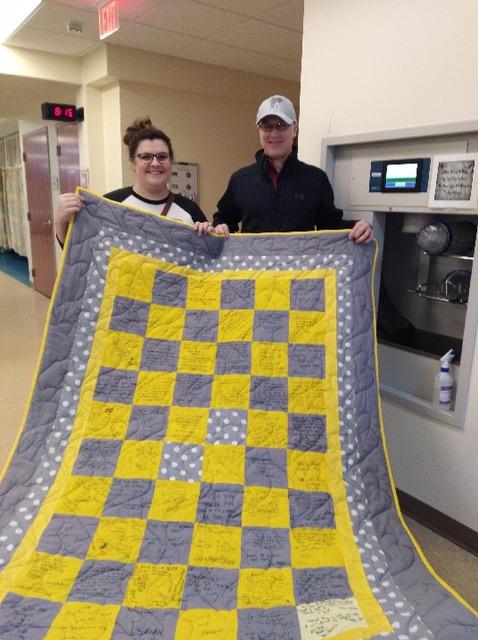 As a long time employee of White River Medical Center (WRMC), Justin Meskimen sees firsthand the impact the hospital has on patients. He never imagined that he would, one day, be entering the building for treatment instead of work, and viewing colleagues as caregivers. He also never imagined that, one day, instead of depending on WRMC to make a living for his family, he would suddenly have to depend on the facility to save his life. For weeks, Justin had been seeing a chiropractor for what he believed was simple but consistent back pain; however, he could find no relief from his treatments. He decided to go to his primary care doctor. After reviewing his MRI, the culprit was discovered. At the young age of 28, Justin Meskimen was diagnosed with a rare form of cancer. “Time just froze for me,” said Justin. Fortunately, his doctor knew the next steps to take. Justin was referred to Dr. Muhammed Khan, Oncologist at Batesville Oncology, a WRMC specialty clinic. When he walked into Dr. Khan’s office for the first time, his thoughts were still cloudy. As a man of faith, Justin knew this was something he could not process or fight without divine help. “I had God on my side, and that was my driving factor,” said Justin. He also credits support from his family, especially his wife, Catie, who is a nurse at WRMC. The first visit with Dr. Khan brought Justin comfort. Dr. Khan focused on treating the physical and mental effects caused by cancer. Justin could see the concern and compassion in Dr. Khan’s eyes. He took time to truly listen and explain. Not only did he take his time in explaining the diagnosis and treatment details, he also offered his personal number for Justin to call if he had any other questions. Justin, at this point, knew he was where he wanted to be to receive his treatment. It was time to fight. He had the knowledge from his physician, support from his family, and his faith. He knew it wouldn’t be easy, but he was ready to face it head on. Justin’s plan of treatment involved three months of chemotherapy. He knew his first treatment would be one of many to fight through. Seemingly worse than treatment were the thoughts in his mind. “Constantly fighting your deepest thoughts and fears is something I would never wish upon anyone,” said Justin. Every time Justin walked into the Batesville Oncology Clinic, he felt his hope being renewed. The staff at the Batesville Oncology Clinic heavily supported his fight. The staff walked with him through his journey. They were like family. As he continued treatment, he noticed he was not the only person that felt this way. Every patient who stepped foot in the facility received this same care and left feeling a little stronger each day. “Something about their support and positive attitude just helps make you stronger,” said Justin. “They give you hope.” The Batesville Oncology Clinic was instrumental in starting a foundation called Ribbons of Hope. The funds from the Ribbons of Hope foundation are used to help patients and their family with travel and other costs associated with treatment. Ironically, Justin always made it priority to give to foundations such as Ribbons of Hope. He knew the contribution would go toward helping others. He didn’t realize he would one day be the person being helped. Today, Justin is proud to say he is cancer free. He credits God, his wife, his family, and the support from Dr. Khan and the staff at the Batesville Oncology Clinic. “I’m proud to say I have beaten cancer, but I will never forget the struggle, and support that helped me get where I am,” said Justin. Justin is back at work at WRMC. These days, he sees his place of employment through an entirely different perspective. The facility is not just his place of work; it is now his greatest resource. And the colleagues who turned into caregivers, well, they are now friends.